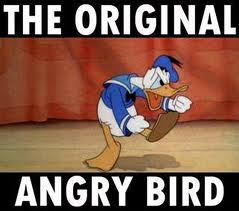 So I decided to create a live action game of Angry Birds and it was a trip, so here you go:

For our Green Pig we used one of those blow up fat tourist suits, green face paint, a cup with some rubber bands for the nose and a sombrero cause I couldn’t find my army helmet and we had plenty of sombreros laying around the youth building.

Before your meeting set up a table and then stack as many boxes and cans and we also threw in some cooking pans to give it some dramatic sound effects.  Next to the table we had a recliner for the Stunt Pig to safely fall off the table onto.

So we did this as an announcement interruption skit that lead to a game.

“Hey everyone, sign up for our blah blah blah” And I had a plush parrot in my hands as I was talking. And when I said the code word ________ The Greedy Green Piggy came running out snorting and stealing my parrot running across the room and jumping on top of the table safely behind his barricade of boxes snorting at me in defiant victory.

That’s when you call for help from the audience to get your parrot back and you happen to have a sling shot and some Angry Birds nearby to help rescue your poor birdie.

So you get 3 kids to load up the sling shot with a plush bird and shoot it at the pig destroying the boxes in the way. By the 3rd shot or last bird that comes in you can have your pig dramatically get hit, spaz out and knock over the remaining boxes as he falls off the table into the chair as he dies.

Have someone cue the Angry birds sound effect of the victory at the end of the game. (There are plenty of Angry Birds soundboards out there for the iphone and android or on the web)

Here is a link to some of the stuff we used, all of which you can use for a ton of other fun stuff.